April 27th, 2011 marks the final U.S. Army UH-1 flight in Europe, as they are formally retired from service in Europe. Based at the Hohenfels training area the last 4 Huey's were flown to Ramstein AB for the last time. 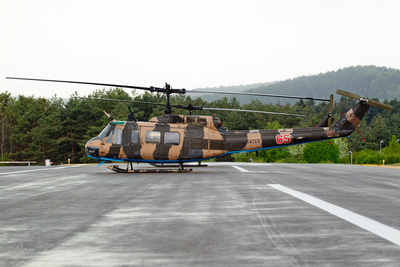 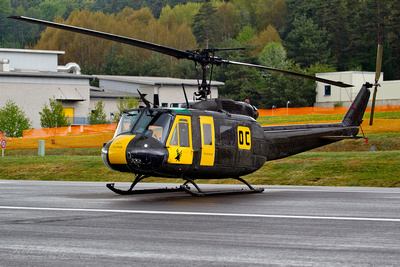 The Hohenfels Training Area is located in the state of Bavaria, Germany in the Oberpfalz (Upper Palatinate)and was named after the market town of Hohenfels. The German Army founded the training area in Hohenfels in 1938. In 1951 it became a U.S. forces training area, and was used primarely by U.S. forces until 1956. From 1956 to 1988, the Hohenfels Training Area was used by NATO forces consisting primarily of American, German, Canadian and occasionally British and French forces. In 1988, Hohenfels became the home of the Combat Maneuver Training center (CMTC), the mission of wich was to provide realistic combined arms training for the U.S. Army Europe.

CMTC was transformed and officially named the Joint Multinational Readiness Center in December 2005. This transformation leverages the unique capability of the JMRC to train U.S. forces for joint and multinational coalition warfare. With over 95 percent of foreign allies in the Global War on Terrorism coming from the EUCOM AOR (US European Command, Area Of Responsibility), the JMRC's location in the heart of the EUCOM AOR provides the best oppertunity for the U.S. forces to train with their coalition partners prior to joining them in combat. JMRC in Hohenfels is the largest USAREUR maneuvering training area and comes under the command of the commanding Genaral, JMTC in Grafenwoehr. More than 60.000 soldiers train here annually.

The ceremony marked the last time the UH-1 aircraft would take flight in U.S. Army Europe. It will be retired from the Army by the end of fiscal year 2012, according to officials. The storied helos were most recently used to train troops preparing to deploy to Iraq and Afghanistan. Upon their retirement, the Hueys will be used as monuments or be sold, according to an Army news release.

The Huey retirement ceremony took place from 1400hrs onwards and after a welcome from CH (LTC) Roy Walker and COL Brian Dillon it was time for LTC Dillon to retire the Huey. He saluted the aircrews and the aircrews responded with the historic words: "Request permission to retire the Huey, Sir". Wich was answerd by LTC  Dilion: "Permission Granted''. The crews boarded their Huey's for the last time and started the engines for a final fly-over. The 2 Hueys flew to the other end of the runway to pick up two more UH-1's and came overhead for the final flyover. 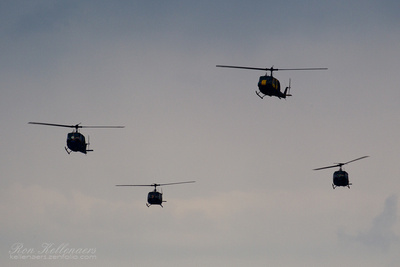 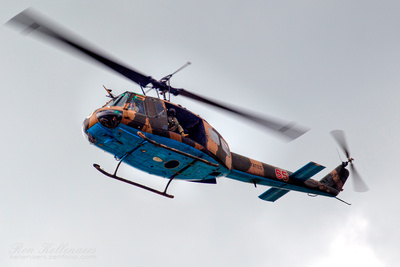 After the flyover, it took some time for the sound of the aircraft to dissipate as they disappeared over the horizon. Some children in the crowd waved farewell; other spectators clapped. A few veterans lowered their heads with a smile and left with their memories...

Farewell UH-1H ''Huey'', t the distinctive “whomp, whomp” of the U.S. Army helicopter dissapears in the distance... and will not be heard over Hohenfels again...