In this article you will find all useful info's for a visit to the low level transition in the rainbow canyon.

Rainbow Canyon is situated east of Las vegas, in California, USA.  This Canyon is part of the low level corridor "Sidewinder'' and is also known as "Star Wars Canyon" or "Jedi Transition".  This because of some scenes of the famous Star Wars movies were shot in this Canyon.  The official name is Rainbow Canyon, this name is given to the Canyon by locals. If you look to the rocky canyon you can see al kinds of different colors wenn the light changes during the day.

Rainbow Canyon is part of the R2508 Special Use Airspace Complex, in Panamint Valley.  The Canyon is a part of the much larger Sidewinder Low Level route, and is officially called "Jedi Transition".  Rainbow Canyon itself is also known as Star Wars Canyon. It is said that some movie scenes of the Star Wars movies were shot here.

The Jedi Transition starts just west of Owens Lake at 36.403047,-118.01239. From here aircraft hug the desert floor and pull up just before the canyon to clear higher levels. From there they enter the Canyon at Father Crowley Point, and continue through the Valley and exit the valley 3 miles from Father Crowley point. Most aircraft call up at 315.9 Mhz before entering. (only pilot to pilot communication) The direction of flight is published as east-west but we have seen aircraft going the other way. 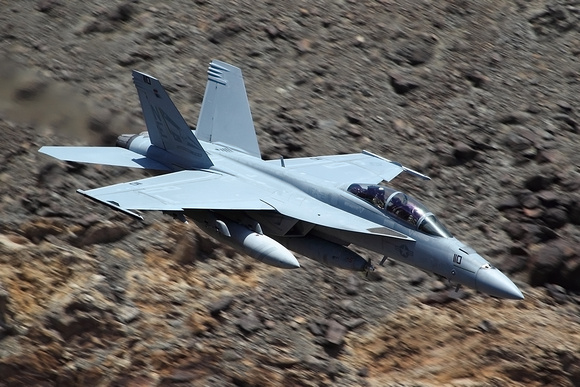 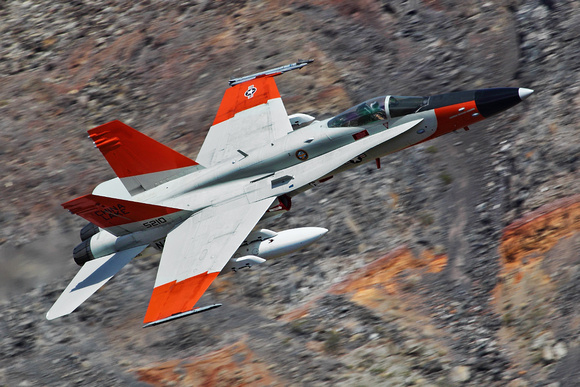 How to get there?
From Las Vegas it's a good 3-4 hour drive to Rainbow Canyon. Look for Father Crowley View point  (1) . This public parking overlooks the canyon, and it's situated alongside Highway 190 at 36.351858,-117.550664. From the parking there's a dirt road to the east, wich flows alongside the canyon, from here there are 2 spots (2,3), to see the jets. For photography from these points you need 500mm or more on a Full Frame camera.
At the end of this dirt road you have a great view over Panamint Valley wich is great for a nice scenic overlook of the west side of Death Valley and Panamint Valley. Again, for aircraft photography from this point you need 500mm or more.
Another viewpoint wich is great for photography, is 1500m to the east of the Parking at Father Crowley viewpoint  (4) . Take the 190 to the east until you reach the most northern part of the 190. On the map it looks like a horizontal 'S' shape. Park your car at the nearby layby and walk 150meters up the hill to the edge  of the Canyon.
From here you have a great view and photography is possible with minimal 400mm. From this point you can choose to walk to the east for different views (5). On days wenn the wind is coming from the west you can actually hear the aircraft in the Canyon seconds before you seen them coming around in the Canyon. Most aircraft enter the Canyon at Father Crowley point, and wenn they come in high you can see 'em well before they fly past your location. 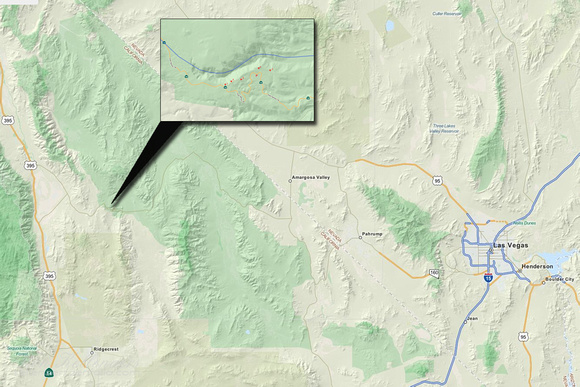 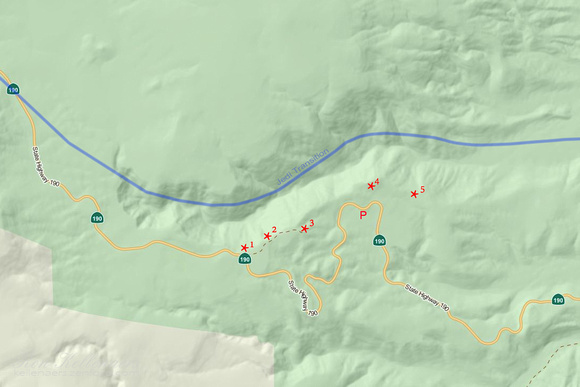 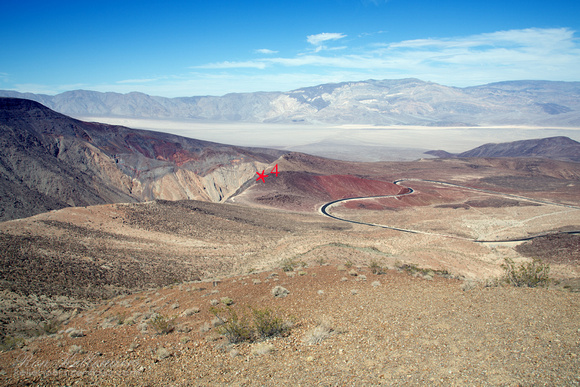 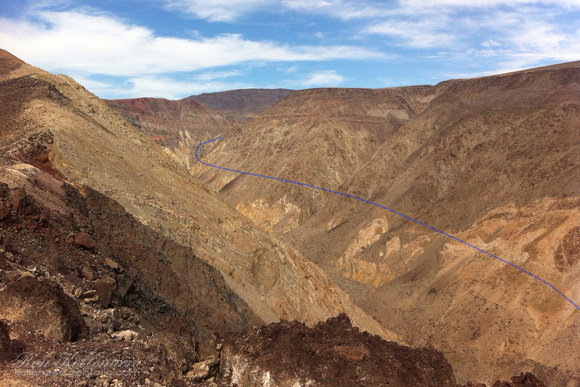 Wenn to go?
Rainbow Canyon is situated very near to one of hottest places on earth: Death Valley.
Death Valley is generally sunny, dry, and clear throughout the year. The winters are mild with occasional winter storms, but summers are extremely hot and dry. Summer temperatures commonly run above 120 degrees fahrenheit.  Comfortable sports wear providing sun protection and sturdy walking shoes are recommended in summer. Winter requires warmer clothing and light to medium jackets. Photography is recommended from late September tolate May. In the summer months it is simply too hot for comfort, and you may see heathaze in your photos that can spoil a great shot.
Where to Stay?
Nearest accomodation is Panamint Springs resort, wich has also the only gas station nearby. Accomodation is not all that great with small rooms in cabins and airco often not working, but it is a great place to eat. With Rainbow canyon nearby you can get a burger and get back to the action within the hour. A recommended stay is the Best Western Hotel Or Comfort Inn in Lone Pine.
Lone Pine is a census-designated place (CDP) in Inyo County, California, United States.  Lone Pine is located 16 miles (26 km) south-southeast of Independence.
Lone Pine and the Alabama Hills became famous as they were used as the setting for Western films, including West of the Pecos (1945) with Robert Mitchum, Samson and Delilah (1949) with Hedy Lamarr, Star Trek V: The Final Frontier (1989) with William Shatner, Tremors (1990) with Kevin Bacon, The Postman (1997) with Kevin Costner, and Gladiator (2000) with Russell Crowe. Be sure to visit Alabama Hills it's great for landscape photography.  Lone pine is a 1 hour drive away from Rainbow Canyon, and the scenic drive is nice, you might be surprised by one or two Hornets that pass you by at Low Level!
What is there to see?
Inputs come mostly from China Lake, and Edwards. Aircraft from Fresno, Nellis and Lemoore are also to be seen. During our three-day-stay we saw Hornets and Harriers from China Lake and F-16's from Fresno and Edwards. But none of the F-16's or Harriers could be photographed as they were too high over the canyon. Hornets were all nice and low and even pulling out of the canyon right before us! Hold on to your hat!
Traffic numbers are not all that high with an average of 4-7 aircraft per day. It is 'hit and miss' basically, with 0 aircaft on day one and +15 on day two.. And anything in between. In the 10 years of photographing aircraft at low level, I learned one thing: Be patient, and leave the scene at least one hour later than planned.. It happened to me more than once to miss the best aircraft just after leaving the scene..
At very high levels you can sometimes see Dogfights or Tanker Missions.
What photo equipment do I need?
You need at least 400-500mm on a FF camera. 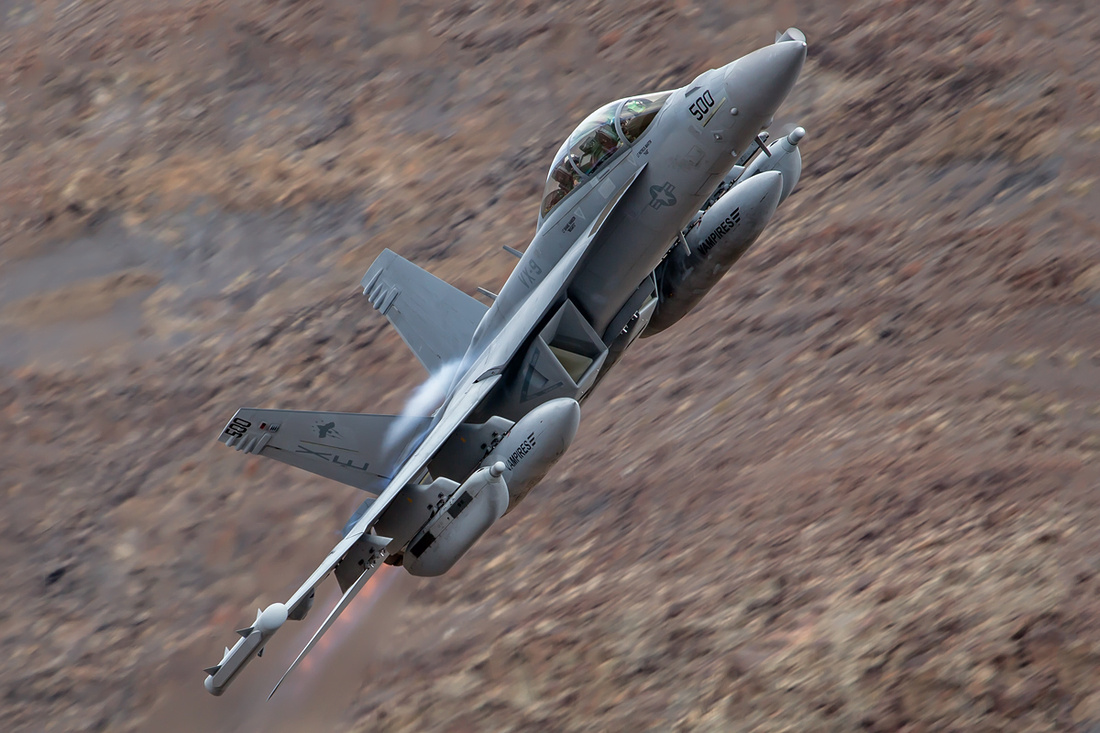 Beware off:
The blistering heat. Espacially in the end or beginning of summer the sun can be your worst enemy, especially with high winds you can easily get a sunburn. An umbrella or other sun protection is highly recommended.  There are no places to hide in the shadow. In the winter it can be freezing cold... so it;s an environment of extremes. Prepare for that.
Most important! have fun!
See my Gallery for more Photos from Rainbow Canyon.
© R Kellenaers - Photography
Powered by ZENFOLIO User Agreement
Cancel
Continue